The first esophagectomy for esophageal cancer was performed by Franz Torek in 1913. A further half a century was required before esophagectomy became an established therapy for cancer of the esophagus and gastro-esophageal Junction.

By this time, in the sixties, also the major types of anti reflux procedures became accepted as effective treatment for reflux disease.

With rapidly growing experience over the next decade a need was felt to have a more robust way of exchanging experience amongst surgeons and physicians with a particular interest in treating esophageal diseases.

The credit goes to Prof François Feketé from Paris and Prof Alberto Peracchia from Padua for the initiation of such an initiative in Europe.

On September 17th 1980 an enthusiastic Professor José Mendes de Almeida from Lisbon hosted the foundation meeting,  bringing together a number of interested surgeons from some ten different European countries during the Congress of the Collegium Internationale Chirurgiae Digestivae (CICD).

The aims were clearly set:

Furthermore an agreement was made with the International Society of Diseases of the esophagus (ISDE), founded in 1979 by Prof Nakayama in Japan, in order to have GEEMO as the European affiliate of ISDE but not without stipulating GEEMO kept its full independency.

Prof Alberto Peracchia designed the logo of GEEMO and organized the first official meeting in Venice in October 1981.

Subsequent meetings were organized on an annual basis in different European cities and the local organizer acted as GEEMO coordinator for the following year.

It was an exciting period, with the annual meetings invariably centered on one particular theme for which a questionnaire had been circulated so resulting in a formal multicentre study.

The results were initially presented at the meeting and a number of these studies became subsequently published in an international peer review journal.

Here are some of these themes: Zenker diverticula and diverticula of the esophageal body, esophageal perforations, esophagectomy without thoracotomy, surgery for achalasia, stapled versus hand-sewn anastomosis.

Needless to say that summation of results from different centers provided excellence as well as unique insights in an era where computers and computer programs were almost non-existent.

The meetings were always very well attended fostering both collaboration and friendship.

The collaboration with ISDE intensified and at each ISDE meeting a specific GEEMO session was organized.

The structure of GEEMO was a rather loose one, comparable to that of some surgical clubs, without any executive committee or council and no formal membership.

This lack of organizational structure together with the rapidly increasing impact of ICT, the latter pushing to set up individual databases, are probably the underlying factors that decreased the interest in questionnaire centered  annual meetings.

As a result there was an interruption of GEEMO meetings from 1992. Nevertheless it was felt that there was still a large potential of ongoing excellent research within different European institutions.

And after a couple of failed initiatives finally sufficient interest was generated to reactivate GEEMO (Document history 2), which happened at the 1998 ISDE meeting in Budapest.

And so the tradition of organizing annual meetings was rejuvenated in 1999.

In the following years efforts were made to set up a more formal organization, with greater conformity and classic structure of international scientific organizations.

Along with this evolution it was also felt that GEEMO had to become a multi disciplinary organization rather than a almost exclusive surgical forum as it had been in the past.

At that meeting it was also decided to change the name and logo and so GEEMO became ESE (the European Society of Esophagology) and eventually became ESDE (European Society for Diseases of the Esophagus) as we know it today.

The history of ESDE is a reflection of the explosion of insights in physiopathology, progress in surgical and non-surgical endoluminal techniques, pharmacological therapies and the need for multidisciplinary collaboration since it’s foundation in 1980 by a couple of great and visionary leaders to whom we all are greatly indebted.

Under the new name and logo and supported by a solid formal structure ESDE has all assets to continue to be the sole organization in Europe to promote research and excellence to the benefit of all patients suffering from esophageal disorders. 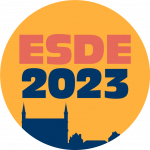 The European Society for Esophageal Disease 2022